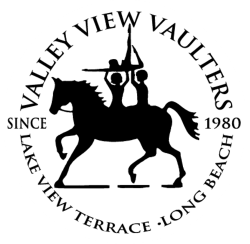 Rick is also a vaulter and earned his Bronze vaulting medal.  He also competed on a B Team level competition at the AVA Nationals.  He still vaults today and can be seen stretching and practicing with the adult group class each week! It is this passion and love for the sport that he passes on to his students and that makes being at Valley View Vaulters feel like one big family.

Both Rick and Virginia co-chaired the National Championships for the AHSA/AVA in 1985 at Cal Poly University in Pomona, in Venture in 1989 and 1993, and at the Los Angeles Equestrian Center in Burbank in 1998.  They both are also charter members of the Board of Directors of the National Council for Therapeutic Vaulters.
magazines, and the official 1984 Olympic Equestrian Program.  She also designed the American Vaulting Association’s brochure that was distributed at the 1984 Olympics, in addition to five of the AVA National T-shirts.

With this background, Virginia not only manages and is an accomplished longeur for the Valley View Vaulters, but uses her skills to design all the advertising, logos, business cards, brochures, and graphics for the club.
After retiring from vaulting, Sylvia returned in 1995 as a volunteer learning the art of horse handling, lounging, braiding and medical backup to basic veterinary care.
Sylvia can be seen working to support and care for all the horses and vaulters at Valley View as well as at competitions and other events.  She is an invaluable part of the Valley View Vaulters program.